Skip to content
Sad to say that Sunday 12th June sees the final Lancashire Automobile Manchester to Blackpool Classic Car Run. After 60 years it has run it’s course and due to continued urban spread in Greater Manchester and Preston areas we are finding ‘interesting’ routes harder to find.
The Final Run will try to recreate the spirit of the early runs using the original routes (there were two on for Veteran and another for Vintage cars) and original route instruction books.
We will be running a little later in the day with the cars starting at two per minute from The Henry Boddington in Pendlebury from 11.00am. They then join the original route on the A6 at Irlam o’the Heights to follow the A6 to the Blackrod bypass.
At Blackrod the ‘Vintage’ Route turns right and the shorter Veteran Route continues along the A6. The Vintage Route then goes to Rivington and over the top to Belmont. The first cars should be in Belmont around 11.55. The Vintage route continues to Wheelton, first car around12.35, and turns left to return to the Rivington Reservoirs to join the A6 at Adlington where it joins with the Veteran Cars to follow the A6 through Chorley. The cars will pass through  Chorley from around 12.45.
Both Routes then continue on the A6 and onto the A582 at Bamber Bridge  then turn right to pass through Lostock Hall to descend Pear Tree Brow from 13.15. Here the route splits again with the Veterans continuing directly to Bowker at Preston Dock and the Vintage Route ascending Marshals Brow to go via Lindle Lane to pass Lancashire Constabulary Police HQ from about 13.30.
The Vintage Route continues to pass through Longton and Hutton to go via Penwortham to Bowker at Preston Dock where it joins the Veteran Route once again. From Bowker BMW both routes follow the A584/ A584 to pass through Freckleton Village from about 13.40.
At Warton the Route splits for the final time with the Vintage Route passing through Wrea Green from about 14.00 and then through Moss Side to Salcoates where it rejoins the Veteran Route.
From there the cars travel along the sea front at Lytham, from about 14.10, to turn left at the White Church and along the front at St. Annes and on to Blackpool. The Route passes the Pleasure Beach then turns right to take in the original finish of the event at the Royal Lancashire Showground (now Blackpool Zoo) to The Italian Gardens at Stanley Park. The First car is expected at The Italian Gardens around 15.05. 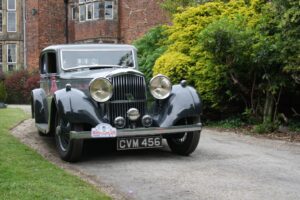 The cars will be arriving over roughly 50 minutes and will then be judged in a Concours with awards for their originality and condition. The premier award, the Blackpool Trophy, will be presented by the Mayor of Blackpool.