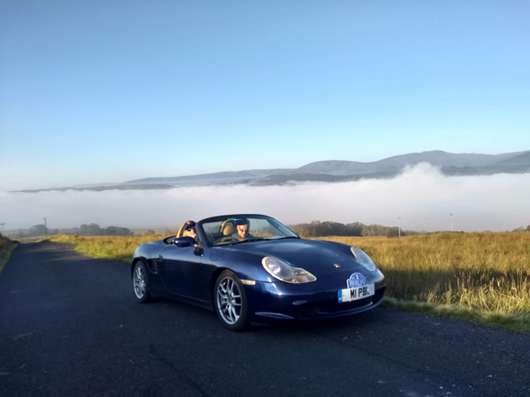 Given these strange times we will be making some changes to this years event to make it ‘Covid compliant’. Of course the event remains subject to government restrictions but is they lockdown roadmap is implemented we will have an event.

The Border Reivers Tour, organised by the LAC, will be a 3-day event aimed at Classic and other interesting cars. Navigation will be simple, primarily using a tulip road book with descriptive text. A good road atlas should enable the route to be followed. There will be no timing, nor will there be any awards as this is not a competition. The Tour will take place from Friday 18th to Sunday 20th September in the Lowlands of Scotland, Northumbria and Cumbria through areas much dominated by the Border Reivers in days of yore! The start will be from the Holiday Inn, Dumfries on Friday morning, returning there for an overnight halt. On Saturday there will be another loop from Dumfries, again returning for an overnight halt before the final day on Sunday which will be completed by mid-afternoon at the North Lakes Hotel, Penrith. Following route checking and further planning an outline of the route appears below.

Day 1 (Friday) Starting from Dumfries, the route covers 170 miles to the west and north of the town, taking in the Solway Coast and view of the Lake District mountains, before heading back inland to New Galloway and Newton Stewart. From here the route reaches the west coast south of Girvan with fine views of granite-producing island of Ailsa Craig (curling stone manufacture) and possible sightings of seals. A lunch halt at the Woodland Bay Hotel follows before continuing through Girvan and heading east to Dalmellington. The route now heads generally south east to return to Dumfries and a night’s rest.

Day 2 (Saturday) The160 mile  route covers an area north and north east of Dumfries, firstly passing Drumlanrig Castle (home to the Duke of Buccleuch, a major Scottish landowner) before crossing the Lowther Hills, via the Mennoch Pass, into lead-mining country and Leadhills, the second highest village in Scotland. After lunch at The Gordon Arms further areas on the route will include places such as Ettrick, the forests of Craik, Eskdalemuir and Castle O’er before returning to Dumfries via Lockerbie and Lochmaben.

Day 3 (Sunday) The final day covers 140 miles which allows for a mid-afternoon finish at the North Lakes Hotel, Penrith where a buffet will be available. The route heads north east towards Langholm before passing the site of the infamous Hermitage Castle which controlled the whole of the Scottish Middle March in the Border Country. A visit to Kielder, Wark and Hayden Bridge precedes the ascent to Alston and then the long descent to Penrith.