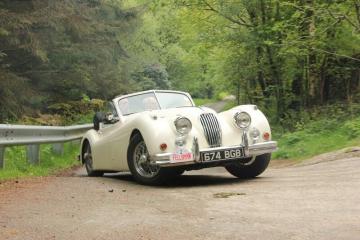 The Fellsman is a Touring Assembly within the MSA definitions but includes an element of skill from the navigators seat not normally seen on LAC events. As such it attracts a smaller but, shall we say, more dedicated following. The format remains as previous events with John Hartley devising ever more devious tests for the navigators. We don’t give awards and there isn’t any timing but the crews get the satisfaction of pitting there wits against John and his team.
My job is simple I drive car ‘0’ following the route marked on the maps confirming that car ’00’ navigated by Mike Wood (yes THE Mike Wood!) has put in via boards in all the right places, none have gone missing and that the route is passable. We sign any diversions necessitated by road closures etc if required and run about 20 mins before car 1 – simples.
All nice and simple all I need is a navigator and the Mini does the rest. Unfortunately this year my regular navigator had to call off at the last possible moment as his dad had to be taken to hospital. That meant I arrived at the start with an empty seat on my left – not good.
However there was a spare bod looking round the cars. Doing anything today I asked followed by can you read a map. My luck was in I had latched onto a bleary eyed Nigel Worswick. He had been up till 3.00 am and was planning to take in the start before going to bed ahead of a quick flight out to the Caribbean where his WRC car was waiting for him and crew to do a stage rally.
Nigel being a good sport then signed on and joined me in the Mini for the day. It’s not often you have a rally driver of this pedigree sitting next to you be he seemed happy enough as we pulled out of the start.
The start was from a new venue at the Bayley Arms, Hurst Green who made us most welcome. The route went out through Stoneyhurst and then out towards Jeffery Hill but with a little twist to take in the first via board. We then went west again through Barton and into the ‘Catforth Maze’ where I cut my teeth rallying in the late 60’s. A great area for a navigational test. We then swung north towards Pilling. Meanwhile the 30+ cars had been streaming off  the start line following in our tyre tracks.
Nigel’s navigation was spot on as we checked off the via boards. Sounds easy but Mike Wood sometimes misses one or adds one on purpose so we need to stay awake! Then out towards Abbeystead and onto the northern section of the Trough of Bowland before some more deviations. The rain threatening at the start came as short brief showers and the views of the fells and out towards Morecambe Bay with the Furness peninsula beyond were magnificent. Brian Taylor had positioned himself by the Jubilee Tower to get the cars as they came though.
Then on to Queermore and on to Caton for a lunch halt. Got there a bit early but right on the tail of Mike Wood and his team. Ted Heath was there to greet us and he set up a simple control in the pub as the rain start. The Station Hotel did us proud with a great spread. Mikes team got away and we waited for the first cars to arrive. Mud splattered cars but happy crews were soon filling the car park. Time to go. Nigel got back on there maps as we headed into the hills towards Wray and beyond. A very nasty cattle grid had been signed by John Hartley to prevent car damage and the gated section proved time consuming with many gates to be opened and closed.
Now south east towards Wigglesworth and on to Waddington Fell following the section of road used by the LAC as a hillclimb before the First World War (not a lot of people know that. By now we had caught up with Mike, he takes time whilst the heavy crew hammer in the via boards. Simple section to get home except we then met a mobile road block in the shape of a flock of sheep which delayed progress somewhat. Them back round Mitton and on to Hurst Green for the finish at the Bayley Arms. Nigel was beginning to droop a little so stayed for a coffee and made his way home to bed. Hopefully he has a great time on his rally – rallying and sun sounds like a great combination.
Shortly afterwards the first crews started arriving with tales of detours and the usual why did we see you going that way questions to each other. A great day, great cars and truly great organisation by John Hartley and his team. Here’s to 2017.
Chris Lee