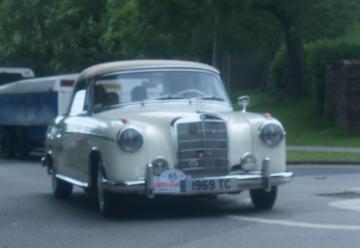 Starting again from Worsley Old Hall, this well supported event attracted cars of all shapes and sizes, and all ages as well, from modern classics to veteran and vintage, great to see them all out on the road.
After signing on, run by Peter Stansfield, Sandra Williams and Eileen Dyson, the cars were off to the start under the control of Ken Wilkinson, Ben Addison and Peter Stansfield.
The first section was from Worsley to The Duke of Wellington, on the Grane Road near Haslingeden, which has proved to be a handy ‘watering hole’ en route on many of our events, where Paul Ratcliffe and Gareth Davies were on hand to sign the route cards. The following section took the cars through some tried and tested roads and lanes, including Pendle Hill and Stonyhurst College,
before reaching the lunch halt at the wonderful Fulwood Barracks, where hot pot with red cabbage and onions awaited the hungry throng. The marshals here were Dennis Walton, Ian Ormond, Les Fragle, Shiela Russell, Tony Gornall.
Then it was onwards through the outskirts of Preston to the next control at Bowkers BMW and MINI dealership near Preston Docks with marshals Paul Hiles and Moira Leighton and after the cards were signed it was off again via a circuitous route to Wrea Green for more card signing at thislovely village control where Glyn Hughes has manned the control for many years.
With Blackpool now in sight it was off again with all roads, providing you were on the right one, leading to The Italian Gardens in Stanley Park where a cream tea awaited and concours awards were presented by the Mayor of Blackpool Councillor Ian Coleman assisted by Club President John Hartley, and the following were the recipients:-
Group 1 – no entries,
Group 2 – Ian & Sue Thompson 1935 Aston Martin,
Group 3 – Jamie & Karen Clarke 1969 Mercedes Benz Ponton,
Group 4 – Nigel & Gloria Bentley 1989 Porsche Carrera,
Overall Concours and winner of the Ken Hadley memorial trophy Phil & Gill Sykes 1971 Jaguar e-type,
Judges choice Hassan Isajii & Alex Haworth 1955 Porsche Speedster,
Blackpool Corporation Trophy and Mayors choice Jim & Jamie Clarke 1928 Bentley.
The final control was supervised
by Martin Wylie, Ben Addison and Mike Chadwick.