With this years world rally championship now wrapped up it’s time to look forward to the first event of 2021 the Monte Carlo Rally.
Thought this article by Mike Wood about the 1963 event would add to your interest.
1963 MONTE CARLO RALLY
By
Mike Wood
This is my story of the 1963 Monte Carlo Rally, my third Monte that I entered with the late great Geoff Mabbs, a good driver, and a true friend.
I had competed on the event for the first time in 1958 with John Waddington in a works Triumph TR3A. On the 1959 event I was in a privately entered Jaguar 3.4 with two Yorkshiremen, Brian Waddilove and Greg Wood, and In 1963 I was invited by Geoff to co-drive with him in his privately entered Mini Cooper, albeit with some works support. Geoff was one of the nicest rally guys around at that time and was considered a highly competitive driver, particularly at international level. He never became a regular full works driver but nearly always attracted some degree of factory support, probably due to his outright win on the 1961 Tulip Rally beating all the established works teams in his own Triumph Herald Coupe.
We knew that our start control w 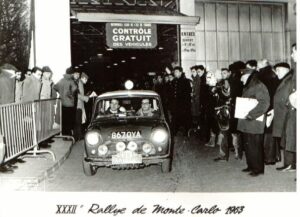 ould be Paris and Geoff let me know that the Paris starters had been allocated the early numbers, our own competition number was 28. I remember making a joke at the time, saying that with a little bit of luck, we could be the first car into Monte Carlo. Little did I know how true that joke would turn out to be?
In 1963 Monte was made up of three segments. The first segment was the concentration run which terminated from every starting point in the town of Chambery. The second segment was the combined route which every competitor went over, lasting about 9 hours and interspersed with various classification tests (special stages). The third segment was a race around the Monaco Grand Prix race circuit. Cars were to be divided into various groups and were then required to complete 3 laps per group. Two years on, the infamous mountain circuit would replace this fascinating part of the rally.
At the start of the rally we drove out of France into Belgium and then on into Holland. I 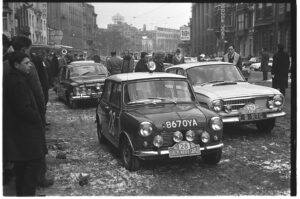 remember this as we had a control at The Hague. I also remember that on the way to the Hague control I was doing my stint of driving on a stretch of Dutch autobahn. There was plenty of snow on the road and for some reason I must have lifted my foot off the pedal quickly and, for no reason at all, the car spun completely around crossing the centre strip. There was no barrier in those days, and I finished up on the opposite carriageway. Geoff had been sleeping and of course woke up with all the commotion going on. When I told him what had happened and that we were now going in the opposite direction, he simply said that I had better get it back through the gap I had caused and get on my way. With that comment he duly went back to sleep. I think the only damage sustained was a bent number plate, which remained bent throughout the event.
From Holland we meander 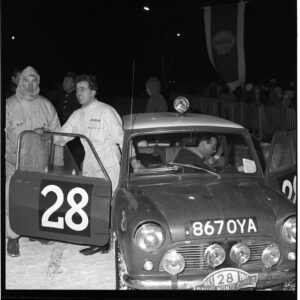 ed our way through France towards Chambery. Now came the important part of the event, over 9 hours of hard driving from Chambery to Monte Carlo over the southern French Alps, via many special stages and difficult road sections. With light snow falling in Chambery, and in the darkness of late afternoon, we left the time control 28 minutes after competitor No.1. We headed for the mountains and the first special stage which started about 7 kms. out of Chambery.
This first stage was probably the longest on the whole event, about 45 kms in distance, rising and descending over three high Cols, the Col du Granier, the Col du Cucheron and the Col du Porte. The weather was atrocious with the snow coming down quite heavily, but Geoff was brilliant, nochance of driving flat out, but he kept a good speed up and, more importantly, kept the car on the road. Eventually we reached the end of the stage unscathed with the town of Grenoble shimmering in the valley below us.
After this stage, we had to find our way across Grenoble to the next stage, the Chamrousse. 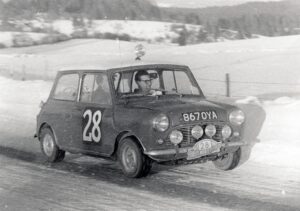 We were using the marvellous BMC route notes which had been excellently prepared and checked by one of the full-time rally crews, without these notes life would have been difficult. The Chamrousse test was about 39 kms, again going quite high with the snow continuing to fall. Geoff was again at his best and we got to the end going quite well with no excursions off the road.
After the Chamrousse test and continuing along the route, there were fewer tyre tracks being left in the snow from the competing cars that should have been running in front of us. With a few more stages to drive I remember asking about competitors running in front of us. It was not until we arrived in Gap that we got a positive answer to this question. Gap was the first point since leaving Chambery that we had some time in hand, we had not lost any time on the way. BMC had arranged a large service prior to the control area, along with all the other big teams, and with the few extra minutes we had in hand we managed to give the car a thorough check over. The Gap control was about half-way from Chambery to Monte Carlo and there was plenty of hectic mileage still left, so it was essential to make sure the car was in good order.
At the time control and with a couple of minutes in hand I was able to ask the marshal in charge how many cars were running in front of us. His answer was very French; non, we were the first car in the rally to check in, indeed my signature on his check sheet confirmed this. As we were now the first car running in the event, our tyres were leaving tracks for others to follow. Whilst it was still dark, I can remember looking back several times to see if I could see any headlights following, but I never could. We were having a lonely rally.
The last special stage was the infamous Col du Turini and there we had the usual efficient BMC service prior to the test. I remember this well as we were offere 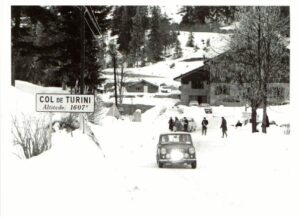 d special Dunlop studded tyres for the stage. This was the advent of studded tyres and these Dunlop ones were crude at that time. I think from memory that they did not have more than about 40 studs per tyre and even these were screwed in from the inside of the tyre. We gladly accepted the tyres, but I cannot honestly say that they made any difference to our stage times, in any case by now we could smell the Mediterranean and were more concerned in getting through the last few kilometres in one piece.
The final approach to Monte Carlo ran from the back of Nice, through the village of La Trinite and up to La Turbie which is on the top corniche overlooking Monte. We bobbed over the top into the village and there below us was one of the greatest sights in the world, Monte Carlo and the blue Med shimmering in the sunshine. At the next 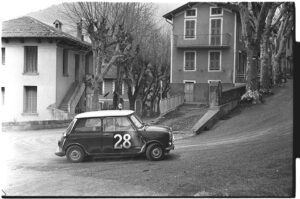 junction out of La Turbie on the road down to Monaco we were immediately confronted by two gendarmes on their BMW motorcycles who started to flag us down. We wondered what we had done wrong, but without stopping us they gesticulated that we should follow them. There then started one of the fastest parts of the rally and we realised that, because we were the first rally car on the road, we were getting a typical French high-speed escort to the final control.
I remember arriving on to the promenade in Monte with veteran GP driver and past rally winner Louis Chiron standing by the control waving the chequered flag at us. The world’s press was also there, and we got a huge reception. We knew we had crossed the finishing line first but k 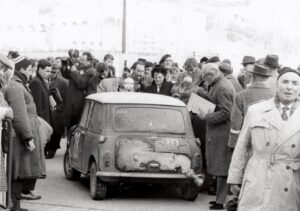 new that the rest would soon be following. We did allow ourselves the thought however, that there might have been a large avalanche behind us and that we might be the only finishers. We would have won everything then, including the Coup des Dames!
We enjoyed our moment of glory for a short while but of course the other competitors started to arrive. I cannot remember how many made it to Monte Carlo, I suspect quite a few were off the road or out of time. The leader of the rally after the road section was Eric Carlsson in a works SAAB, in second place was Pauli Toivonen in a works Citroen and in third place was Rauno Aaltonen in a works Mini Cooper.
There now only remained the race around the Monaco Grand Prix circuit. This was divided up into various groups of cars each doing three l 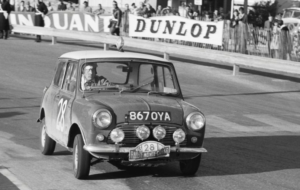 aps. It was quite an enjoyable test for the co-drivers as we did not have to accompany our drivers. It was very relaxing for us all to sit enjoying a beer or two, watching our drivers perform on their own for a change. The outcome of the races did not alter the leading places, however. Eric Carlsson and Gunnar Palm in the SAAB won the rally. Pauli Toivonen in the Citroen was second and Rauno Aaltonen and Tony Ambrose in the Mini Cooper were third. Paddy Hopkirk in a works Mini Cooper was 6th overall.
Finally, what position did we finish the event? Well we were classified a very creditable 18th overall and took away the Autosport Trophy for the best placed British private entry.
The 1963 Monte Carlo Rally may not have been my most successful Monte but it was probably my most enjoyable one and I have always been proud of our final 18th overall position as a private entry. Not only was Geoff Mabbs an extremely good driver, he was one of the nicest guys rallying during the 60’s. He had a wonderful sense of humour and he never let anything worry him for long. He never quite became a full works driver, but he could nearly always command some sort of factory support from the various team managers of that era. Sadly, Geoff died at a young age in the late 1970’s, he is still much missed by those who remember him from that wonderful “Golden Age of Rallying”.
If you like Mikes article don’t forget he has written a book ‘The Last Liege’ which goes into some detail about the Liege event ran and how he and John Wadsworth were the only crew to get a Mini to the finish of this car breaqking event. Ring Mike on 01282 771563 for details.