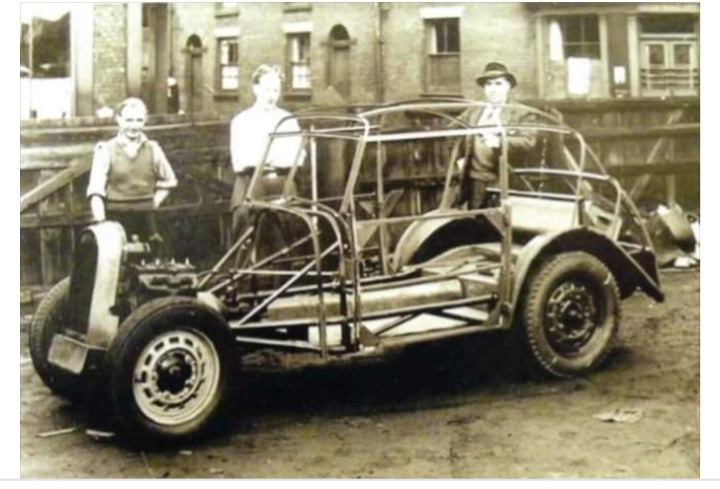 I know this is a long shot but it is something which may promt a memory in one of our members,

I had the following request posted on out Facebook page which I fgound interesting. The chap knows the history of Bucklers (he used to compete one) but this particular model/version has prompted his request. I think he would like more info on the coach builders involved. Basically the car is Ford 10 mechanicals on a Buckler chassis but the bodywork appears unique.

“Following the recent discovery of the attached photo, I am seeking any history of the sports car shown in the making.I do know that the photo was taken at the premises of a coach builder in Leigh Lancs called Kaye, Madely and Fisher, almost certainly in the 1950s. It shows a GT body frame being built on a Buckler Mk.6-4 multi-tube chassis, which would normally build into a 4 seater sports soft top. However the radiator is from a Morgan.

Charley Madely was a coach builder to approved Rolls Royce standards and well known in motoring circles. Apart from the above information, the Buckler is a total mystery but maybe some very senior member of your club, may have known of it, which I know is a very long shot.”

Further information on the Buckler mystery photo we asked about earlier.
Thanks to our friends at Northwest Casual Classics in particular Phil Stott we have a few more facts to go on.
According to Phil’s research there was a coach builder believed to be Queen Street off Chapel Street near what was County Motors in Leigh. It looks like the premises at the back of the picture could be the Highfield Inn? As Phil suspected they did in fact make busses and trams. Info from Leigh history group. 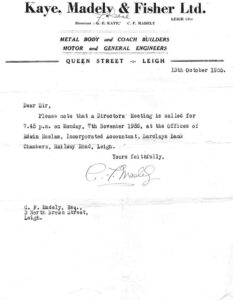 The first picture is a Letterhead from Oct 1955, one of the directors had changed from Mr G.E.Kaye to Frank Reese.
Phil says you are correct in what you say about the Ford-10 with a special body, built by Charlie Madely at his Queen St, car work shop in 1950. But he does’nt think that anyone will remember this particular car project by Charlie with it being seventy years ago.

In the second colur picture Charlie is standing centre but no one knows who the other two males are. Although by comparing with the picture of the group standing with the Armstrong Siddeley it looks like the chap on the left is G.E. Kaye and the one in the middle in the white shirt could be Percy Madely. 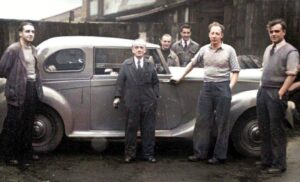 The third picture (with the group standing by a grey Armstrong Siddeley)) is of Charlie at his Queen St premises, under the railway arches also taken in 1950, names supplied by Charlie’s son. Standing in front of the Armstrong Siddeley on the right is Johnny Cunningham, Percy and Charlie Madely, Mr Boydell. Standing behind the car are Mr G.E.Kaye and Jack Kinsella. 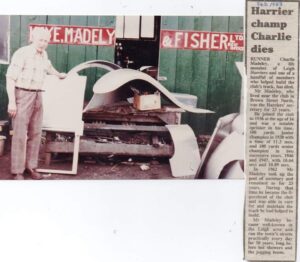 Finally a photograph of Charles F.Madely in his work yard on Queen street in the 1970s along with an obituary newspaper cutting dated Feb 1988. Charlie’s name is spelt wrong in the newspaper clip by the Journal Editor.