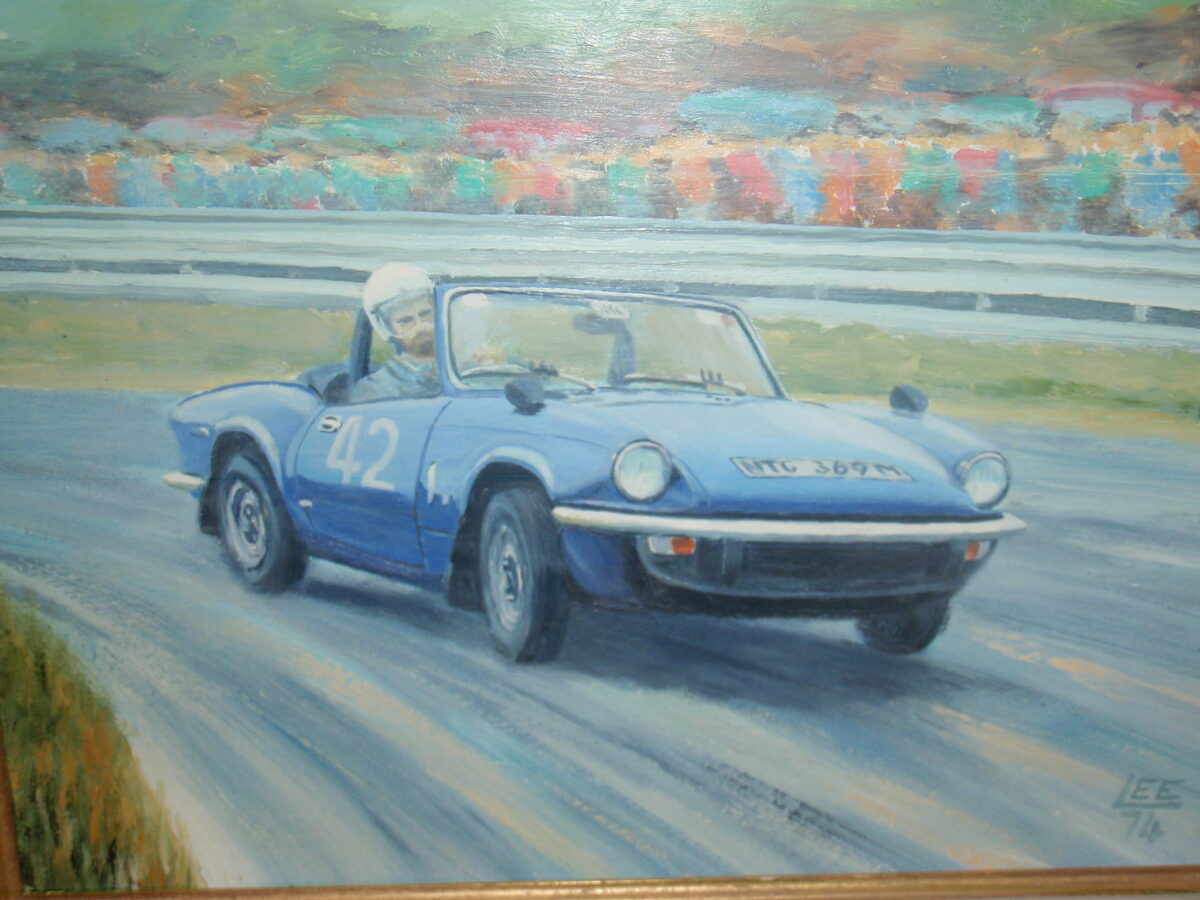 It struck me that whilst many LAC members would know the general layout at Longridge for motor racing the sprint layout as used by both Longton and District Motor Club and Lancashire Automobile Club may be unfamiliar to them.

The featured picture is a painting of me coming out of Quarry Bend into Paddock Bend – I seem to have lost the original.

The picture, below, shows the layout of the sprint layout and I thought you might be intersted to have a competitive run round with me.

The paddock is situated along the cliff top at the bottom of the picture. We run down a gentle slope to a collect area by the Start Line (shown red).

As cars depart we slowly move forward to the start line – not to close to the car in front as they kick up stones as they warm their tyres!

Now the marshals call us forward to the start line and carefully align us with the timing beams. The traffic lights flicker red, amber as they rock the car gentley back and forward. It is a down hill start so the car tends to creep forward.

Once the traffic lights are a steady amber we await the green. A car already on the circuit flashes past on our right. Once he reaches Weighbridge corner the lights will go green and we can start in out own time.

The lights go green and we sprint away onto Rock Straight – the quarry wall looms above us to our left.

All to soon we reach Weighbridge Corner a tight right hander. JUst in view to our left tucked behind the barriers is the tow truck and ambulance.

We are now on the short straight after Weighbridge the grid markings for the race start flash past beneath us. In the Esses we pass through the timing beams for the first time.

The Esses is tricky to get right as the exit determines our positioning into Quarry Bend. Get this wrong and the hump on the inside of the corner will spin you round and send us into the barriers which are all to close on our left.

With the line just right we enter Quarry this is the start of a climb which continues into Paddock Bend. Paddock is easy to get right but gmake a mess of it and our speed along Rock Straight will be compromised ruinig our time.

As we leave Paddock Bend the trck drops and as we go over the rise the steering goes light. More than one car has lost it here but we are OK. Back on Rock Straight we are more confident both tyres and brakes are wrmed up and we leave bracking for Weightbridge a littel later and carry more speed. As a result we clip the dirt on the outside of the corner as we exit. It is not simply a matter of going flat out to cross the finish line at the entrance to ther Esses. The marshals on the very end of the pit wall on out right (just where the pit exit for the race meetings is located) wave a chequred flag. Our run is over.

We cotinue into Quarry and exit to our left just before Paddock Bend to return to the paddock.

By the way this layout meant that the timing crew could get a time for a flying lap picking up the car as it past the timing lights at the finish the first time the car passed and then again when it finished it’s run. This is why Kim Mathers time in his BRM at a Longton meeting qualified for many years as the fastest lap of Longridge and remained tied with two others who set their laps at race meetings when the circuit closed.

The picture below shows an arial view of the caravan park which is there today. I have marked the spring circuit in red to give an indication of the way it fitted inot the layout. 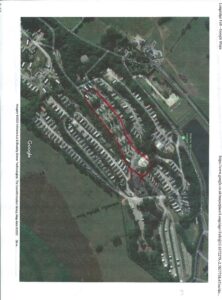