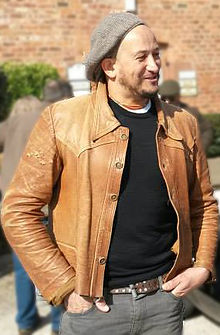 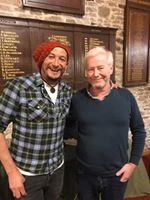 Wednesday 20th November saw the latest motor sport supper night featuring a famous name from the world of motoring and this time our guest was non-other than Fuzz Townshend, the master mechanic from Chanel 4’s popular car restoration programme Car SOS.
Accompanied by Peter McIlvenny, Carol Nash Insurance, for whom Fuzz is an ambassador, Fuzz fielded a range of questions from a capacity audience at Whalley Golf Club, the LAC’s spiritual home for such gatherings.
Fuzz explained how he had started out at the West Midland Passenger Transport Executive as a bus mechanic (buses being a real passion of his), then becoming a college lecturer in music and technology before going on to a job in journalism with Practical Classics where he went on to become Technical Editor; and from there to being owner of a car restoration business, Westgate Classics. As well as this he was, and continues to be, a drummer with a band and has managed to mix his passion for music with a love for older cars.
The question and answer session, which sandwiched a break for a light meal, enabled the attendees to ask a wide and varied set of questions, mostly to do with Car SOS but also of his music interest. It transpired that a budget of circa £25,000 is nominally allocated to each SOS restoration project and Fuzz is given the final say as to whether a car is in a credible state to be restored. There have been a number of close shaves when trying to conceal a job from an unsuspecting recipient as well as long days and nights trying to complete a car in readiness for the big reveal.
Providing anecdotes about his life, Fuzz was both engaging and entertaining and all the time spoke with a smile on his face, something which endeared him to the gathered audience.
At the end of the evening the club presented him with a token of thanks by way of a bottle of whisky and offered an invitation to take part in two of its 2020 events, the Great Manchester to Blackpool Car Run and the Coast to Coast Class Tour, so it’s possible that we might see him once again sometime next year!
Before leaving a number of people came forward to have the obligatory selfie after which it was time to head home.
Another successful and very enjoyable club night. Here’s to the next one…..