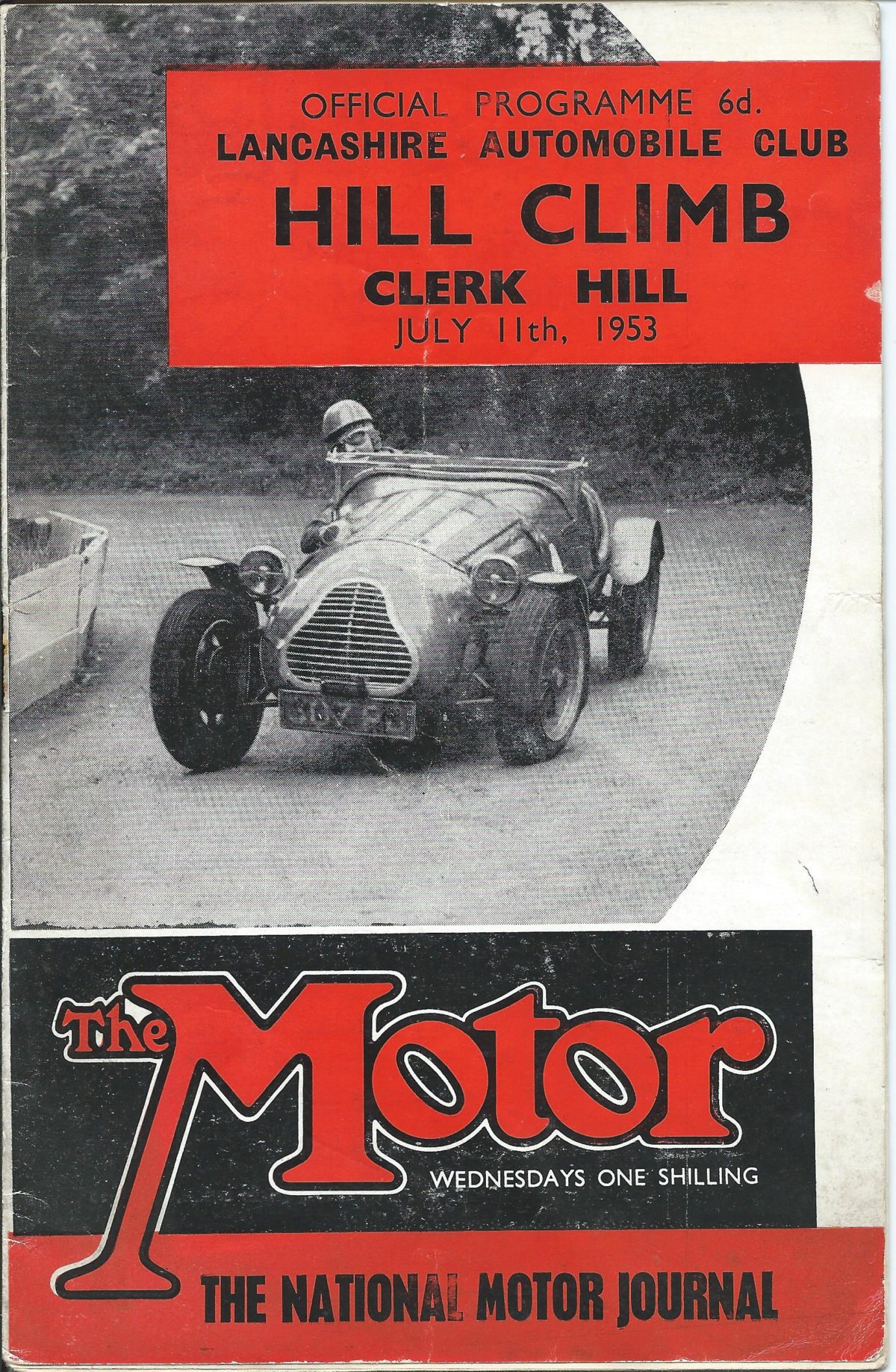 For Christmas in 1958, when I was eight years old, I received a fantastic Christmas present ‘The Eagle Book of Cars and Motorsport’ in its 192 pages I learned about how cars work, are designed and built as well as much of the history of the motor car. 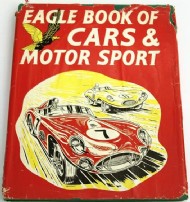 One particular section really fired my young imagination that was obviously the one concerning motor sport. In this section I learned that motorsport wasn’t just racing in some far off circuit but had local roots. One photo really hit a chord and that was of a car hurtling up a rough hillclimb course not far from home at an event organised by a local club.
That hillclimb was a Clerk Hill near Whalley and the club was, of course the Lancashire Automobile Club – I was truly hooked!

Sadly, I leant the book to a friend (you know who you are!) some years later and, as is the way with all things it got lost. Imagine my surprise when a copy of the very photograph was sent to me, via Mike Wood, from John Wadsworth.
Thanks to John and Mike I have managed to piece together some more details on this particular bit of club history. 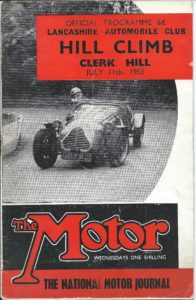 The hillclimb was first held in 1951 and the picture is from the 1953 event. The competitive section of the hill itself was about 250yds with left and right hand bends with an average gradient of one in eight. Whilst the steepness of the hill presented little difficulties to the cars and motorbikes of the time the loose surface and tricky bends placed a premium on skilful driving and throttle control. Even then health and safety was a concern and the programme stated “spectators are strongly recommended to position themselves around the course in such a manner as to avoid stones flung up from the wheels of the ‘throttle happy’ types.”

It goes on to say “The danger points are indicated, and in any case should be obvious to you as an intelligent person; the not so intelligent people who get themselves hurt may have attention from the St John Ambulance men who will be present, but we don’t want to trouble these gentlemen if it can be avoided.”

As a final warning it states “The course must be kept clear whilst the competition is in progress, otherwise the Clerk of Course will suspend racing until the course is cleared; the co-operation of all spectators in this matter will be appreciated.”

There were joint Clerks of Course. Jack Taylor, for the motor cars and AB Gaskell, for the motorbikes. Secretary of the meeting was Jack Duckworth who was still active when I first joined the club. 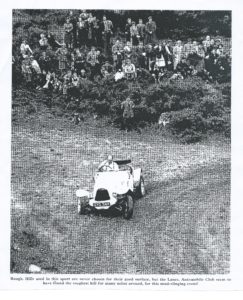 The picture from the Eagle Book (right) is of Mike Wilson in his ‘special’ car number 27. Mike was entered under BARC and as you can see driver protection, although normal at the time, was pretty non-existent. According to Mike Wood’s records Mike Wilson managed the 250 yard course in 34.3 seconds which was amongst the quickest times on the day.
According to Mike’s records the fastest of the car entry was J. Clegg entered under Lancs and Cheshire Car Club also in a special with a time of 32.4secs closely followed by LAC member Charlie Hardman in his Dellow with a time of 32.8secs. Charlie was a very good rally driver in those day’s.

Mike Wilson is best remembered as Clerk of Course for the Yorkshire Rally and stage commander for many years on some of the Yorkshire Stages on the RAC Rally. Again another in another interesting twist Mike Wilson masterminded the Harewood Hillclimb which opened in 1962 and is still in use to this day. Perhaps Clerk Hill played no little part in Mike’s thoughts.

As for Clerk Hill itself with its limited length it’s time in the limelight was short lived.
By the way if you wonder where it is Whalley Golf Club where many of you have attended LAC events is situated on Clerk Hill Road so the links continue to this day.