Sometimes it is interesting to see what LAC members have been up to on events not organised by the club.

Recently Chris and Jan Lee went over to Ireland to join the Alfa Romeo Owners Club on thier annual pilgrimmage to the Emerald Isle.

As you know Jan and I help organise several Classic car runs a year for the Lancashire Automobile Club. So the thought of going on an event organised by someone else always appeals as we can relax and enjoy the event with someone else doing all the hard work!

The Alfa’s to Ireland events have been on or list as a must do event ever since we got our first Alfa. Unfortunately work commitments and my duties on the World Rally GB (which often clashed with the run) have effectively prevented going on the run until this year.

The World Rally GB was early and no other commitments were in the diary so we duly entered this most enjoyable event.

For us the event started on the Wednesday with a drive to Holyhead. On arriving at our hotel we found several other Alfas already in the car park. We were worried about how we would be received by the ‘regulars’ but they were most welcoming and friendly.

The early morning boat to Dublin was only half full so we had a pleasurable crossing and then a pleasant run up the east coast to our accommodation at The Cottages in Laytown. The

Cottages are a group of thatched cottages inside a walled garden with some dating back over 300 years. Ours was very comfortable and well appointed. 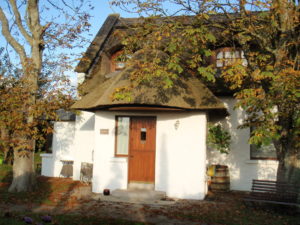 In our room we found a bag with all sorts of information on the local area prepared by the organiser Nick Clancy. Later that evening we were joined by fellow Alfa owners Chas and Viv who had come over on the later boat and were sharing our Cottage.

The Friday and Saturday were ‘at leisure’ so we took the opportunity to explore the Boyne Valley on the Friday and Drogheda on the Saturday. The Boyne Valley is well worth a visit with great scenery, castles and Neolithic sites all there to explore. The village of Kells is well worth a visit with some fantastic Celtic crosses and an old abbey which the famous book of Kells is named after.  That evening we ate at the Lime Kiln which is a gastropub just outside Laytown and had a first class meal.

Drogheda in the rain is not great but we went by bus and toured the shops – which went down very well with Jan! That evening we prepared our own meal and had a restful night in before the run on the Sunday.

Sunday dawned dry and bright which was perfect for the run. For the run itself we were joined by several local Irish Alfas and after the usual group photo we were handed our Route Books. These followed the usual Tulip diagram format and had distances in both miles and kilometres to cater for both British and Irish entrants (nice touch). In essence the Route Book took us to locations where we could park the car and get out to look for clues and ‘treasure’.

Jan and I don’t normally do Treasure Hunts but the way the event was organised meant you could simply follow the route book as if it was a Touring Assembly. We chose the latter but collected a few clues at each stop to prove we had indeed followed the route.

We had one wrong slot in the day caused by a truck parking in front of a road sign – not bad. The route took us south along the coast towards Dublin with clues at villages such as Balidrigan and Skerries together with stately homes (Ardgillan Castle was astonishing). The route then went inland collecting clues as it looped northward to the Battle of the Boyne site just west of Drogheda.

The hard bit was then navigating through Drogheda for the final clues at Millmount Museum and back to the finish at The Village in Bettystown. A wonderful route well-chosen with a mixture of roads. The clues themselves gave some fascinating insights into the history of the area.

In all we recorded 53 miles and took just under 4 hours to complete the run.

It was then back to Laytown to prepare for the Gala Dinner. This was held at the Village and we enjoyed an excellent meal in good company. Prizes for the Treasure Hunt were then awarded and imagine our surprise when we received the last of many awards with a score of 25.5 points (the overall winners got well over 40).

That left us with free time on the Monday to enjoy the area around Laytown and Bettystown on foot. Laytown beach is used for horse races by the way and is long and flat ideal for a pleasant stroll with views from the Mountains of Morne in the north to the Skerries in the south.

All that was left on the Tuesday was to say our goodbyes and return home. We had plenty of time before the boat sailed so meandered our way to Dublin again taking in the sights and visiting Malahide Castle and Gardens on the way to the port.

The trip back was as pleasant as the trip out and we spent the journey talking to fellow Alfa owners about the weekends event.

All in all, a thoroughly enjoyable event and one we hope to repeat in the future.