We significantly changed the route for 2019. Normally we keep the same lunch halt which has been at Akebar Park for many years. However, whilst we were happy with the venue eventually you run out of roads to use.

So to open up pastures new we went looking for an alternative and found The Inn at South Stainley just north of Harrogate. Venues with the amenities we need are few and far between. They have to be able to cope with around 150 people arriving in around 40 minutes, be able to serve them and enable them to get on their war in 55minutes as well as provide adequate parking and be flexible on time for serving lunch. The Inn ticked all the boxes so we were able to go further south than usual.

The route started from the Midland Hotel in Morecambe at 08.30 and went out to Halton and Caton before taking in the Trough of Bowland and Slaidburn to a coffee and comfort stop at The Anchor in Gargrave.

From there we travelled east through Grassington and Pateley Bridle towards Ripon. Just before Fountains Abbey we turned right to go through Markington and south to The Inn at South Stainley. The first car arrived about 11.20.

After a good buffet the cars left going east to Aldwark Bridge and then through Castle Howards grounds and into the Yorkshire Moors passing through Cropton and the fords from the opening shots of All Creatures Great and Small. The next Control was at Scripps Garage in Goathland a popular stop on previous events.

We took advantage of some newly surface roads to make our way to the finish at Dunsley Hall via Grosmont and Sandsend (to complete the coast to coast adventure. The first car reaching Dunsley Hall at around 3.20pm.

We were greeted at Dunsley Hall by the Mayor of Scarborough and parked on their front lawn for an informal Concours d’Elegance. Whilst the judging took place the entrants enjoyed a buffet and had a good natter about the days motoring. 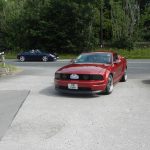 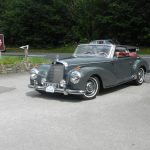 ayor chose the Ford Mustang as the car she wished she could take home and our acting president, Andrew Ogden, stepped in to select the President’s Choice after being banned from choosing a certain red Alfa Romeo! The President’s choice went to the 1953 Mercedes.

After saying goodbyes to those who chose to return home or who had booked accommodation elsewhere those staying at Dunsley Hall had an enjoyable evening before returning home on the Sunday.

Many thanks to all the organisers and Marshals who made the day possible and of course all the entrants who brought their fine motor cars for us to enjoy.