Setting off from Worsley Old Hall in Manchester and winding it’s way along a route of more than 100 miles through the beautiful North West countryside, passing through Wrea Green and 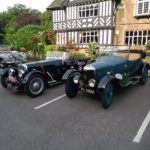 Lytham along the Blackpool seafront finally finishing in the Italian Gardens , Stanley Park the 56th Manchester to Blackpool proved a most enjoyable event.

The entrants were welcomed by the Mayor and Mayoress of Blackpool Councillors Gary and Debbie Coleman and presented with a finishers award and a specially commissioned stick of traditional Blackpool Rock.
The oldest car that took part was a 1904 Renault which completed the Fulwood to Blackpool part of the route.

Clerk of the Course and Club President Martin Wylie said “ all the entrants had a fantastic day and for those who hadn’t taken part before they were wowed by the final approach along the tree lined route into Stanley Park and display parking area around the ornate fountain.”

“We had an excellent selection of cars in this year’s run which spanned over nine decades of motoring . We have seen an increase in interest in the more modern classics, probably spurred on by the broadcast of the many Classic Car restoration programmes being shown on television at the moment and the relative affordability of entry level classic cars enthusiasts can now restore, drive and enjoy.”

Entrants were treated to a traditional afternoon tea in the Park’s Art Deco cafe followed by the awards presentation during which the Mayor presented the prestigious Blackpool trophy to Brian and Matthew Holt from Manchester the proud owners of an immaculate bright yellow 1956 Chevrolet Belair.

The Manchester to Blackpool Car Run is organised by the Lancashire Automobile Club which was established in 1902 and is one of the oldest motoring clubs in the UK. The Club wishes to thank all those who made the event possible. including their sponsors Bowker BMW and Blue Butts, plus the support received from Visit Blackpool and Blackpool Council’s Parks Service .